Hi, for transparency sake, we started a kick-starter but it was suggested to our team to try this instead
Our mission with this project is to change the way we think about education in gaming.

Blockchain Adventure is an Action Adventure RPG with a focus on Game Design and Education.

Its a tool for all ages to learn about the Concepts and History of Blockchain Technology.

The Game combines Robot Collecting and Combat with Puzzles and Quests.

The reason for using crowdfunding is that this project will live or die by the community. I want to make games that people want to play and this is a great place to confirm the community is interested. I also want to avoid investors because they want to put things in the game that I don’t believe in. They either want me to put their favorite companies in the game or place advertisements.

Uncover the real past of Genesis Island and Earth 3.0. The original earth was destroyed a long time ago. The earth today is man-made. Who created it? Why was it created? What happened to earth 2.0 and the original? 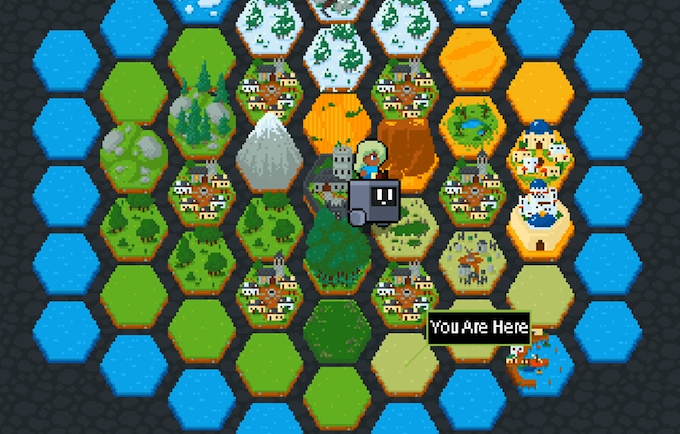 You were born on Genesis island. The city in the middle has been the main hub for all commerce and government. The age of the internet was no different. Databases were stored and maintained in Central City. If you needed information, you knew where to go. Recently, Central City has gone dark. Its metal gates won't open, and none of the other cities can access their information.

The professor in town is busy trying to figure out what happened to Central City so he asks you to take an experimental mobile computer (Node) to the next town over. Travel from city to city, uncovering the clues to the mysterious darkness. Along the way you will learn how use blockchain and cryptocurrency in an effort to save the island.

A world of unimaginable secrets with a wide range of memorable characters awaits you. Through puzzles, quests, and combat, we introduce the history and concepts behind blockchain technology in an engaging and visual way.

The World -- Each town has unique main quest and side quests. Helping or ignoring NPCs opens up various quest lines and rewards.  Some quests can be solved in multiple ways, providing you with a deeply repayable experience. Scams are also prevalent, just like in the real world. To some, these will be hard to spot, but these experiences do unlock new dialog options and quests. We have built this game to be scaleable so that as the industry advances, we can record it with new quests, NPCs, and towns. The art, while cartoon-ish and colorful, is based on where the application was originally developed. 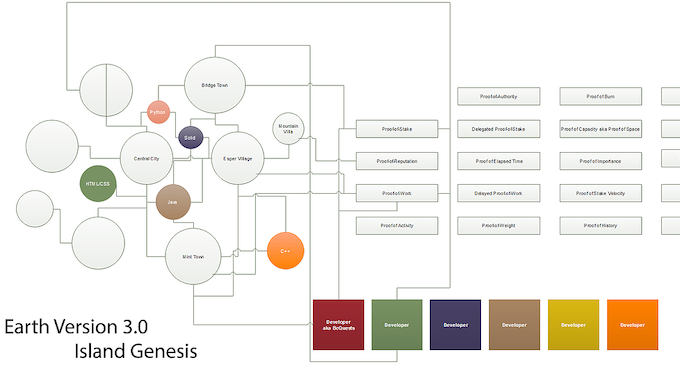 The Story is about Blockchain History - each town represents a different application with quests that push you forward through its history. Every NPC or town’s problems in the game comes from real-life examples of implementation. There are no advertisements in the game, all coins have been re-named and re-imaged to fit within this fantasy world.

The puzzles in each dungeon are visual representations of how that application operates. Trees represent blockchains, and grow as you complete puzzles. In the beginning you might be solving puzzles by matching colored crystals. As you advance, different puzzles open up. One type allows you to transform objects in the world into data crystals, and than protect those crystals by fighting off monsters. Upon completion of each dungeon, an ancient machine awakens, granting you and the NPCs of the town above, new skills and technology. 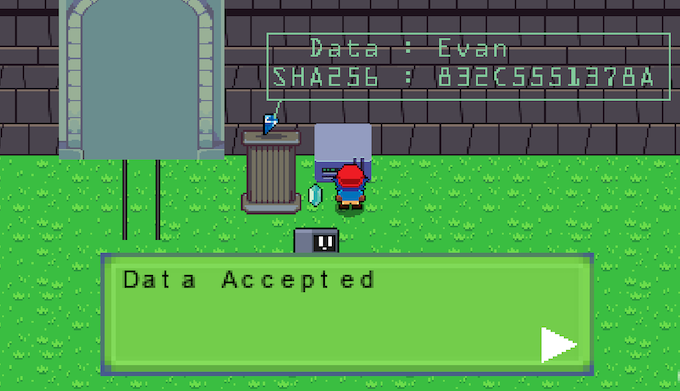 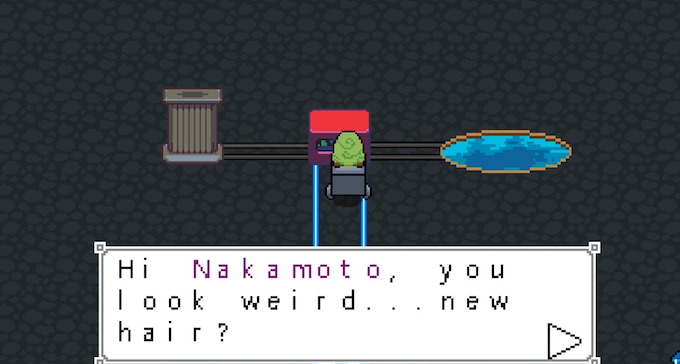 Your node is the primary defense and offense you have when exploring dungeons. Make sure you’re prepared. The PC-Shops and Arenas offer various forms of upgrades. GPUs, Motherboards, Cooling, and weapons. Collect Over 120 Different types. Program them to mine in-game cryptocurrency. Upgrade and equip them with the best gear and battle in the Arena. Each attachment can effect both mining and battle. For example, motherboards allow different attachments. 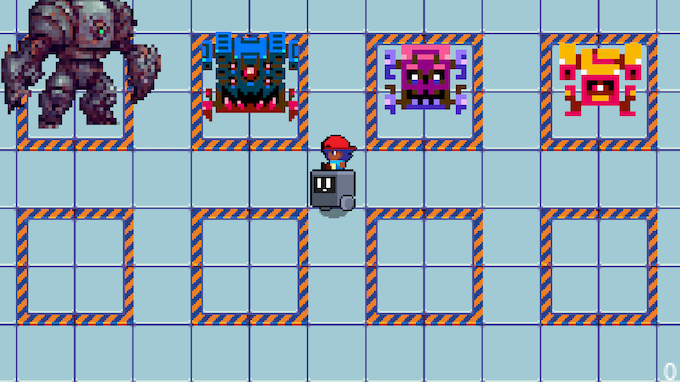 Battle Arenas are based on a different algorithms. These battles are on side-chains, because trying to destroy someone else's node outside of battle defeats the purpose of decentralization. In this world, these arenas are purely for sport. Ex: proof of work - a time-limit is set to 30seconds. You can disable the mining function of the other bot to receive the coin, or stay alive enough to share it. The currency you get in arenas can be traded or exchanged for arena Gear. 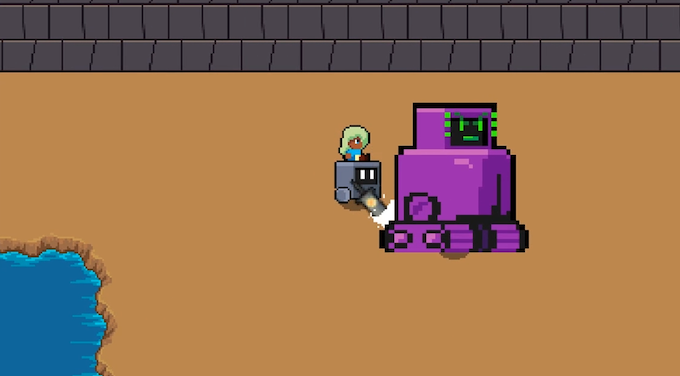 In-game Cryptocurrency is made by each town. Each coin has different uses such as money, trade, and crafting. Discovering different coins opens new NPC dialog options. Exchange is available to trade different coins.

Crafting applications may be used to for personal ledgers or built to help solve problems. Decentralize your crafts by setting up nodes across the world or by telling npcs about it. Or both. Your coin will also be given a value based on various aspects in the game.

NPCs are made with care, with dialog options, backstories and their own problems. They can aid you in quests, offer personal quests, and can be taught how to use blockchain. They are also created with different morals. Some may trick you into scams, some may need help sending money to a loved one in another city. 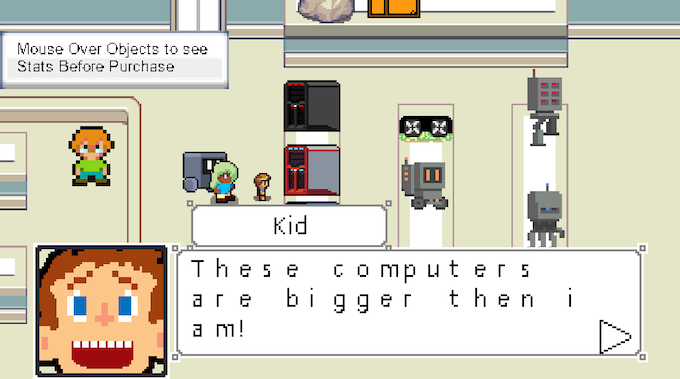 Quests range from helping an NPC set up a wallet, to finding your lost friend. Each quest is unique. Some side quests have multiple ways of completing, but give you different rewards. Events in the game also trigger different results of current quests. If you accept a quest and ignore it, the outcome of that quest may vary.

Player Options give you control over how you play the game. 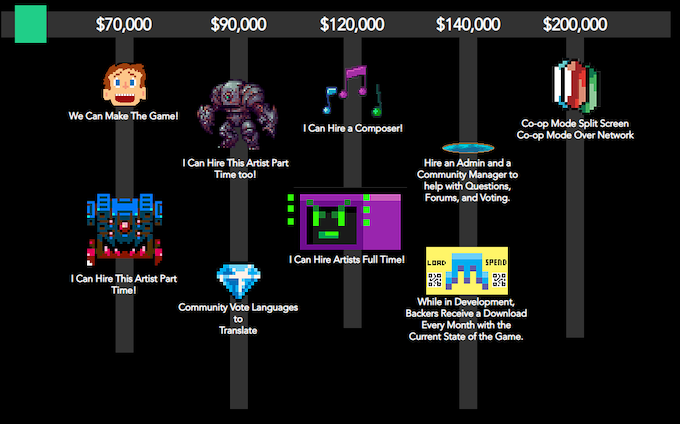 $70,000 - We can make the game and we can hire an artist part time that specializes in small scale pixel art!

$140,000 - We can hire a dedicated community manager to help take care of the forums and user input, allowing the rest of the development team more time to spend on the game. This also allows us to send our backers a version of the game every month so you can see the work we put in.

$10, NO cash shop or any extra purchases for in-game items.

Digital documents will be DRM-free, available in PDF, EPUB, and MOBI formats.

All backers Get access to our discord, access to the forums, and development opinion polls Your input will help shape the game.

All physical rewards are limited editions and wont be sold after the campaign ends. 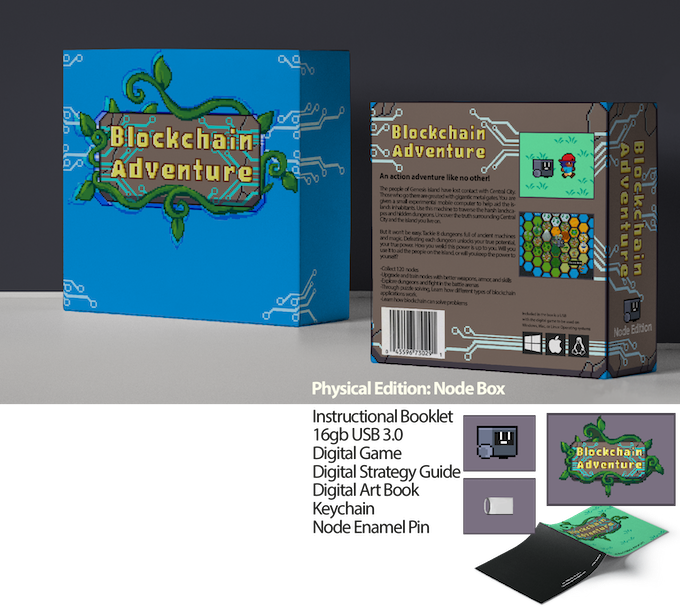 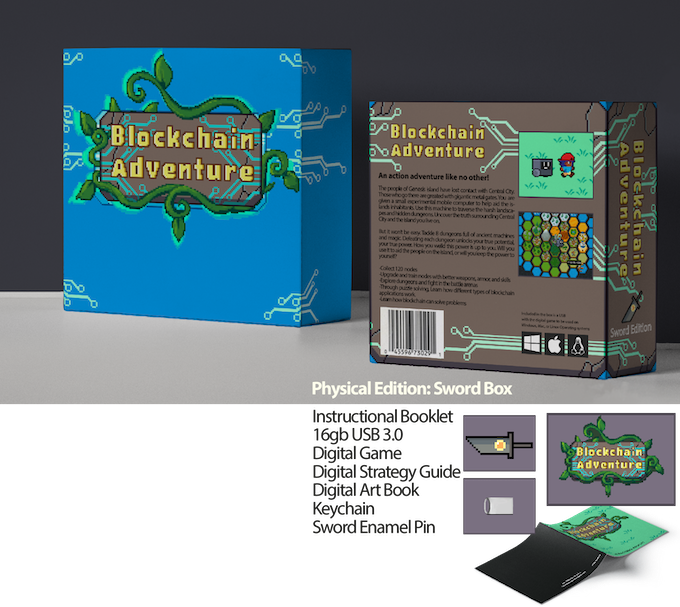 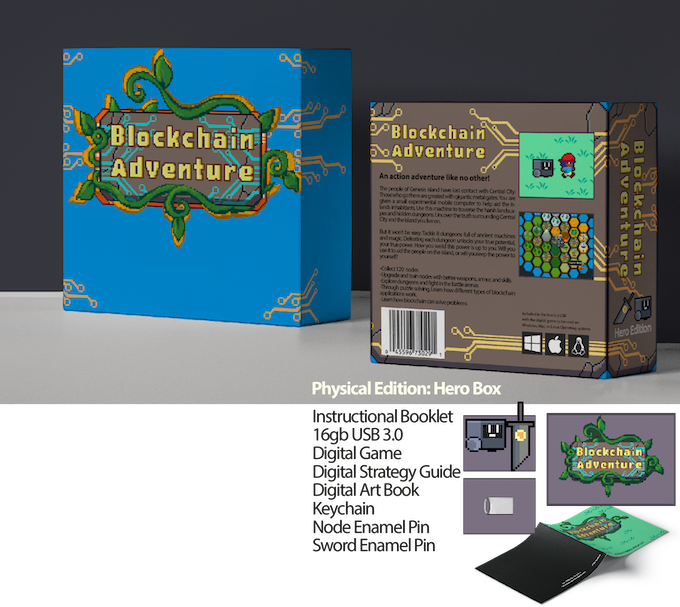 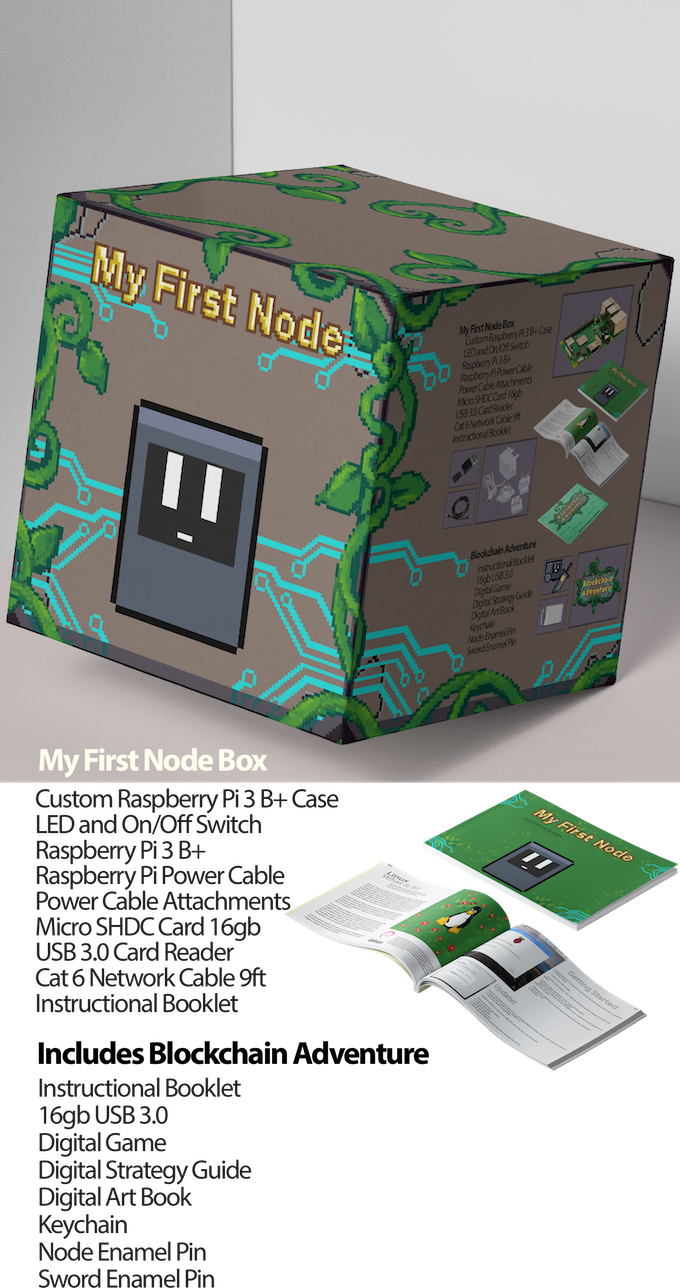 Our team could best be described as game design and blockchain enthusiast. While on our own journey to learn about the exponentially expanding universe of all things blockchain related, we noticed a lack of entertaining games which provide a broad, simple, and honest explanation of blockchain and cryptocurrencies.

Ultimately, we're driven to create a FUN gaming experience that will equip players with enough knowledge and hands-on experience to confidently participate in real-world blockchain projects. It can be a big leap entering the blockchain world, and we want to make it easy and fun.

Our main objectives are:

To increase our reach, we also plan to translate the game into multiple languages. View our stretch goals to learn more.

We know knowledge is power and want to provide players with enough general and unbiased information so they can make decisions for themselves.

The core members are based in the historic City of San Antonio. Lead partners Evan Hansen and Chris Moken brought the team together after meeting at Geekdom, the city’s premier tech co-working space. As passionate entrepreneurs with experience in business, programming, art design, and music, they joined forces with a mission to redefine the way people with limited tech exposure learn about exciting new technology through games. With the guidance of advisors adept in blockchain and cryptocurrency, the team is well positioned to make an exciting adventure game that accurately captures the use cases and limitations of blockchain. 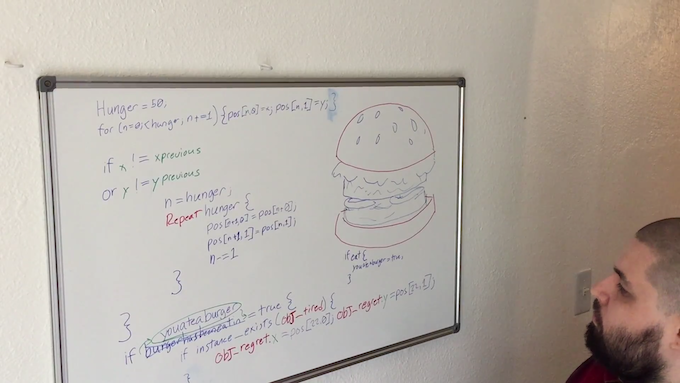 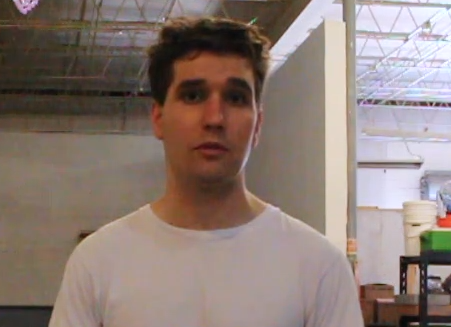 Advisors in Business and Blockchain 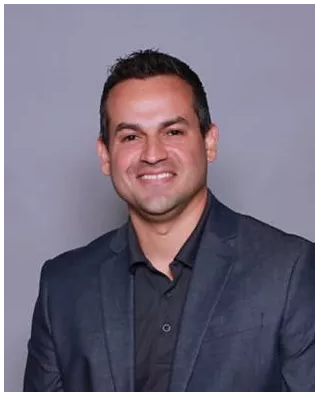 A business strategy consultant with a passion for innovation and open source. 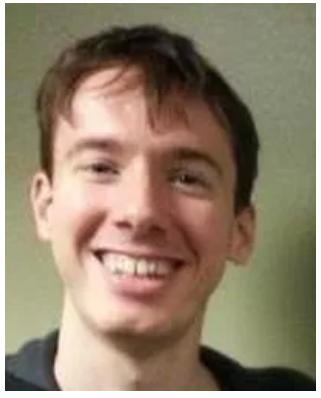 Blockchain enthusiast with a passion for Smart Contract Development.

A Strong Advocate for blockchain technology. Anonymous travels the global teaching struggling communities how to use and set up blockchain.

Artists we want to Hire when funded 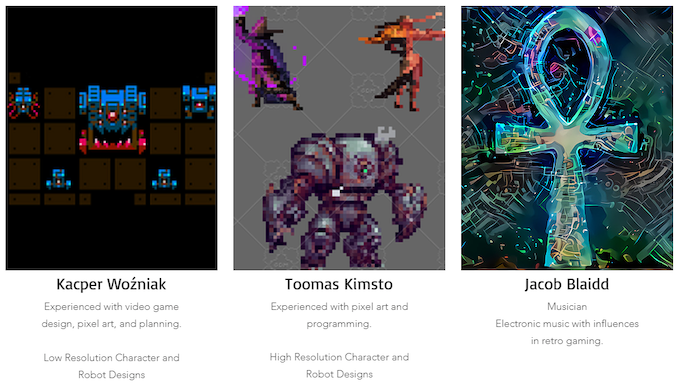 Our mission with this project is to revolutionize the way we think about education in gaming.

I'm taking a serious approach to game design in order for this to make a big impact across the world. Before deciding to do kickstarter, we spent the last 5 months deep in research, design, and prototyping to make sure this game has a solid plan. We also have blockchain advisors and real school teachers to help.

We plan on development for 12 months. During this time, we will be consulting with teachers and blockchain advisors, along with doing our own research on blockchain history. Then we transform all that into a world with lots of fun mechanics, puzzles, and story. Its a lot of work, but we have a dedicated group of people.

(The art is not part of the schedule right now because our budget affects how we organize the development. The list below shows programming and music only).

Part of the funds go towards hiring expert pixel artists. While i can do the small stuff, it would be great to hire someone who has more experience in animation.

All the extra hires, like community admin or porting to Switch come from the Development Percentage.

Turning Blockchain applications into puzzles is a challenge, but we have been prototyping different types before the crowdfunding. Interestingly enough, other game developers said they always discover better ways to implement puzzles during development.

The others challenge come from the people we hire. If an artist doesn't fulfill their contract, we will try our best to fill roles in a timely manner. We treat this project like any other business. Video games are fun to make, but people trust us to do a good job. we cant let the them down, this will follow us for the rest of our lives.

An Action Adventure RPG based on the history, concepts, and Real-World implementation of Blockchain Technology Or choose a reward