Muonium is an encrypted cloud made by some developers around the world, from students to electronics and software development engineers who want to contribute to the protection of the privacy movement on the Internet. We want to see an Internet where people can keep their private life safely.

This is why Muonium is there : to provide you a safe cloud storage solution to keep your files protected against anyone who should not access it.

Muonium can also be deployed on your own server which means that you can have your own secure cloud at home. 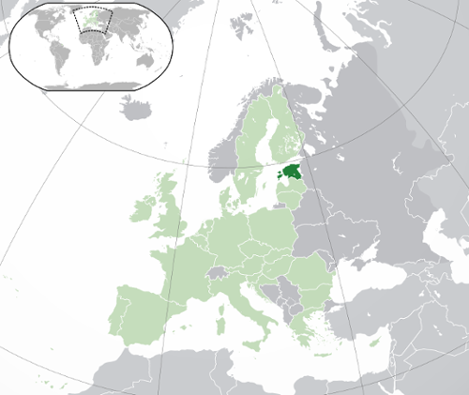 The company will be registered in Estonia and the servers will be installed also there. The Estonian cryptography laws aren't restrictive, that's why Muonium will be deployed there.

Your data protected from governments.

Muonium uses cryptography to protect the privacy of the users. Our model is the end-to-end encryption which means that only the user (=you) will be able to access your files. To enter in the details, before uploading them (=the files), Muonium will encrypt them on your PC. Consequently even the Muonium team and governmental organizations won’t be able to access them. 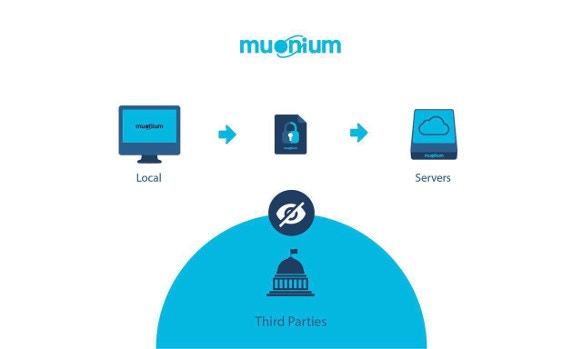 The goal of the Muonium team is to make encryption as comprehensive and easily available as possible. Even if the user knows nothing about cryptography, he will still be able to use it safely while keeping his privacy up.

Our servers are running only on Gnu/Linux, especially the Debian distribution (Debian is an operating system made by a strong community), which is one of the best representations of what “Free software” means, without forgetting that the Debian's community take with serious security issues. Consequently there isn't any backdoor in the operating system of the servers. They are not corrupted and have a strong internal security.

Everywhere, even in your pocket ! 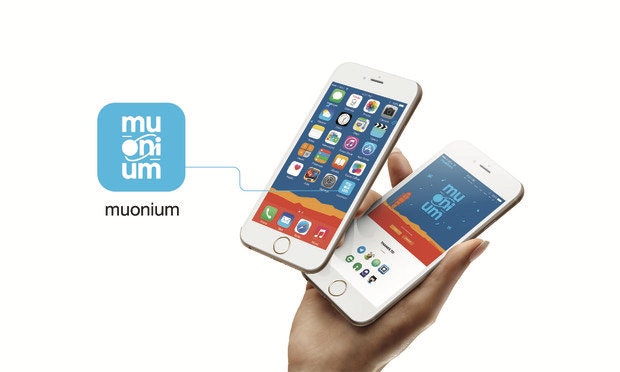 We're building a mobile and desktop application but currently only a web version is available. Only modern web browsers are advised to be used on Muonium. You will be able to access your files no matters where you are.

Losing data is a thing of the past.

The Muonium's infrastructure is designed to avoid any loss of data. Your data will be replicated three times in total. This means that if one nay two servers break down, your data will remain available. 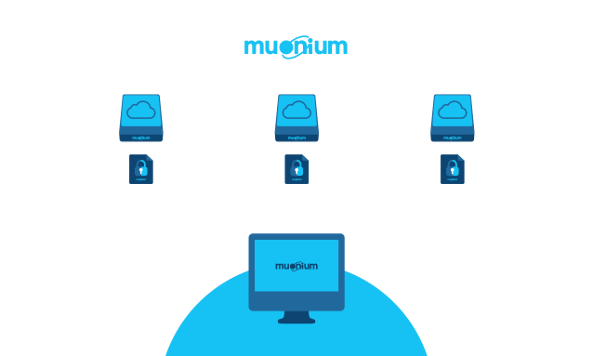 We think building Muonium as a free software is the better way to move forward the knowledge in cryptography implementations, and it's also the better way to build a free Internet, where everybody can contributes and believes in a project. Because Muonium is OpenSource, everybody can trust the project and confirm that we don't lie when we say that Muonium is a safe place for your personal data. 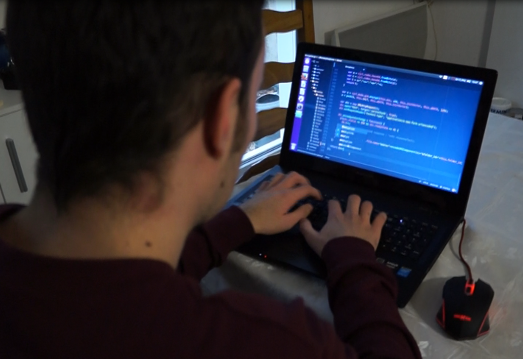 Muonium is a free software and the core team will ask advice to the Muonium's community to take the best way. That means that even the users can say what they want or recommend something. We're very open-minded. 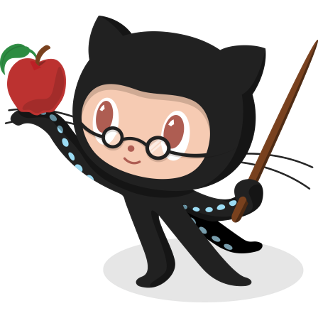 We've chosen a crowdfunding because this is the more community way to reach the money required to launch correctly the project. We're very oriented to a community project.

Users can be fully involved!

In addition to being opensource and libre, our project is also very democratic. You can join our group on Framavox and make a proposal about anything, and then, other users (and we) will vote and will consider the submitted proposals. We want to build a community thanks to our transparency and our openness.

Experts will be able to develop their own client!

We're currently developing an API, which will allow developers to create their own client for Muonium. In this way, customers will be able to choose any third party client provided by the community instead of the official clients made by the Muonium team.

A cloud at home

We plan to launch "Muonium Gateway", a box which can host Muonium independently of Muonium, but by one click, the box can be turned in a gateway. 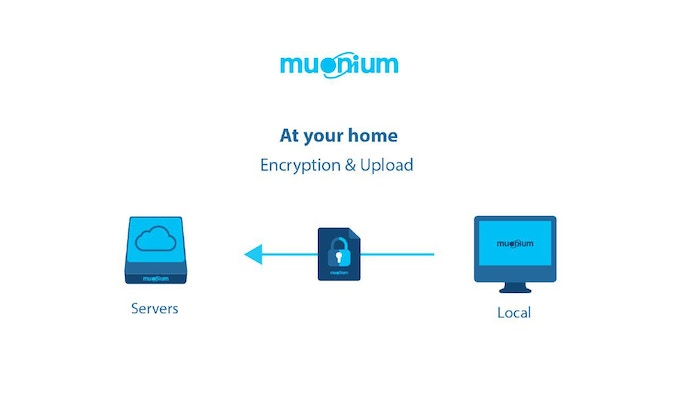 Configured as a server, the user have just to put an external hard disk, and upload his files. It's like a Synology NAS, or Dlink, etc. But with an end-to-end encryption. 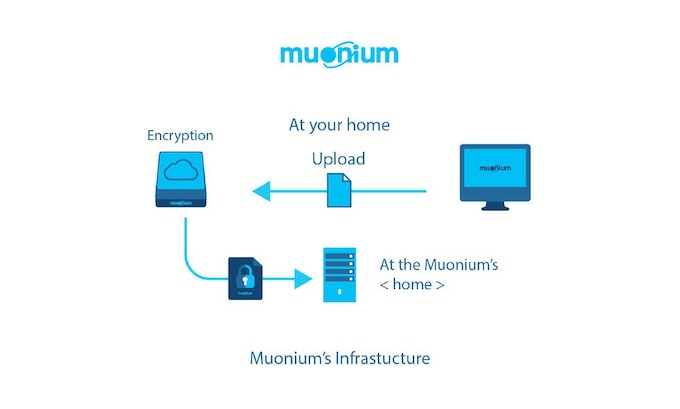 To resume, the files are uploaded on the little box you have at home. The box encrypts the files, and sends it to the Muonium's servers. Like that, your data will be available even if the little box breaks down.

Firstly, the money earned will allow us to create the company and buy and install servers in Estonia as soon as the crowdfunding done.

Secondly, we'll improve the current design. We'll also go out our API first version and the official client for it.

Then we will propose paid plans, with this the user will be able to get more storage space by paying, it's a way to contribute to the project. We'll spend this money in servers and the core team to make a living.

Next, we'll try to launch a little project, but not now, it's the "Muonium Gateway", a cube which hosts Muonium, with it you aren't dependent of the Muonium's infrastructure, the cube is your infrastructure.

(As soon as the crowdfunding is done)

Finally, we will open an enterprise and premium accounts support. These support services will allow us to get money to buy more servers to provide more native storage space for free accounts. Companies will be able to install Muonium on their own servers, with or without the enterprise support.

Thanks to these persons who helped us :

And we also thank other people who are not mentioned here for privacy issues. 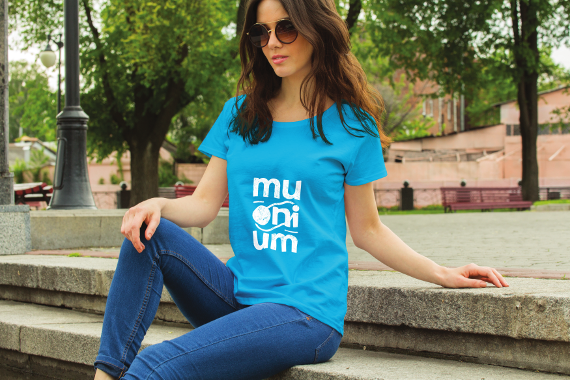 Firstly... How am I supposed to pronounce that name?

Too much details... What's Muonium?

Muonium is an encrypted cloud, your data are encrypted. Consequently, you remain the only one owner of your files, even governments cannot access them. Muonium is democratic: you can make proposals, and say: "Let's decide about this stuff together!". Muonium is technically transparent: the code is publicly available by anyone who want to check it, so that you'll know if we're lying and to move forward the cryptography implementation on such a project. Without forgetting that you'll be able to install it on your own server, and then, you won't depend on our infrastructure.

Of course, that's one of the fundamental principles of Muonium. The user haven't to pay to keep his privacy. The free offer is natively 10GB, if you need more, you'll have to buy a paid plan, around 20€/month to get 1TB/month. With the time, if the enterprise and customers supports work fine, we'll be able to provide more native storage space for the free plans, from 10GB to 15GB nay 20GB.

Then, my files for sure cannot be read by any governmental organizations?

Technically speaking, the “zero risk” doesn't exist. In the other hand, if a government asks us the users data we'll try to go against it. And without forgetting that even if a government takes some users data, these data will be encrypted.

I don't really understand the difference between you and the others cloud...

Firstly, Muonium is fully OpenSource, that's why if there's any security issue or backdoors put on purpose, the entire world will know, the technical side is totally transparent. Secondly, we implemented AES-256 (the encryption algorithm) with a strong mode: GCM, with this mode, AES-256 is one of the most secure algorithms in the world. And finally, we use an operating system which's one of the best about security.

Do you have a BitCoin (BTC) address I can donate to?

Can I invest in Muonium?

Yes, you can, by contacting us at [email protected]

Kantum Technologies is the future company, and Muonium is the project. By the way, it's a word play of Kant (the philosopher) and Quantum, which's the minimum of energy involved in an interaction.

Your website isn't really talkative contrary to your presentation...

Yes. We'll remake it later, for now we focus our whole development process on the cloud.

Muonium is an encrypted, opensource, and democratic cloud made by several developers around the world.

Or choose a reward